Podcasting is...
everyone else making money but you

You enjoy podcasts, and perhaps you indeed enjoy making podcasts, but you don’t like where everything is going. Where it’s going is quite obvious to you, and the official Kremlinology claiming otherwise frustrates the hell out of you.

In the same way you resent, down to the cellular level, the way media, governments, and academia lie to your face, you object to being treated like a benighted peasant who cannot see what’s coming down the pike.

You don’t like getting lied to about where podcasting is going. I’m not gonna lie to you.

You know there are winners and losers in podcasting. So far, haven’t people like you been losing?

Yet while all that is happening, you nursemaid 200 or more podcast subscriptions, and have a cast of favourites you listen to religiously. Fans like you hate getting kicked in the teeth.

I’m the one who’ll tell you the truth about the winners and losers of podcasting.

This is not a “newsletter”

An E‑mail newsletter has no staying power or archival value whatsoever. An URL that does not change (or at least does not break) can be relied on for decades.

Articles are hosted at different places

After 30 years online, I was not willing to start a new site entirely from scratch. Nor was I willing to use a default template. Further, in my site’s control panel this was the 15th of 15 available Web slots.

With certain articles designated members-only, postings were always going to be in two different places.

I’m the one who’s been right about everything, and look how well that’s been going for me.

I’ve been online for more decades than you’d think possible. I ran actual Listservs, one of which is still in operation 25 years in. I championed blogging early on, yet also diagnosed how the gutter press constantly misdiagnosed blogging.

But, despite being a vegan eldergay, I’m also technically competent. I was big in the Web-standards movement until every dot-com decided people’s home Internet was good enough to handle 8 MB homepages. Still and all, you will search in vain to find a Web page of mine that does not offer valid HTML. I can write RSS “by hand,” which means with the aid of BBEdit templates.

I put in a lot of time within the salt mines known as standards committees. I was hated and feared by one faction of the W3C, then I called one of its standards complete trash and explained why, which prompted the politburo to unfuck its own spec at long last. (“You’re welcome,” I told them.) I was so beloved on a PDF standards committee they flew to Toronto partly to make sure I could attend their conference. Then they stabbed me in the back by letting a (“Black”) carpetbaggeuse from Microsoft fly to the big PDF conference in China, then come back and report that Europeans called us too American. Of course this was well after the chair of that committee ate Vena roti with us and regaled us on how he almost but not quite overthrew a Central American government.

I know my shit.

I’ve had the Toronto Public Library threaten me repeatedly for subjecting them to the only journalism they’ve ever had to deal with in a century. So did a local design school, incensed that I would show up to its graduate exhibition every year and critique what I saw. (Graphic design in particular had never dealt with criticism of its criticism until I came along.)

A critic of Canadian journalism had me on his podcast twice, largely due to my writing a critique of his critiques, until I finally heard a well-concealed recording of that same critic getting a good laugh at my expense while addressing a crowd of compliant college leftards. (They’re the kids now banning your podcast.)

Eldergays like me have survived a handful of extermination attempts during the surprisingly fast-moving decades in which we devolved from inventing and cultivating culture to being deemed racist oppressors. Every tiny fragment of expertise and connoisseurship we ever had to offer has now been set aside and shitcanned by what passes for society, which dearly needs to be peacefully bifurcated and trifurcated until factions who loathe me and my kind, and are quite overtly bent on our destruction, do not have to be in my face all the time, or mill about in my neighbourhood, or manifest themselves in my life in any way, shape, or form.

Podcasting, since it talks to the individual via private headphones in the typical case (since, in effect, it whispers in one’s ears), offers a model of such peaceable secession. You’ve already seceded – your subscription list proves it. That’s one of the many facts, all obvious in retrospect, that I will be the first to tell you.

My more than 40 years’ experience in typography has been discarded, not least by the Mormons who blocked me from the primary typography discussion forum or the progressives who blocked me from the other one. I am the sole expert in a handful of mildly esoteric fields, and the outright omertà against me in those fields has been obligingly and good-naturedly confirmed to my face. (Equally so in journalism, despite my nearly 400 newspaper and magazine articles and my nonfiction books, of which I am writing another.)

I have listened to podcasts for 14½ years – dating back to a prehistory few remember, in which one had to predownload an episode to iTunes, then presynchronize said episode to one’s iPod Nano: 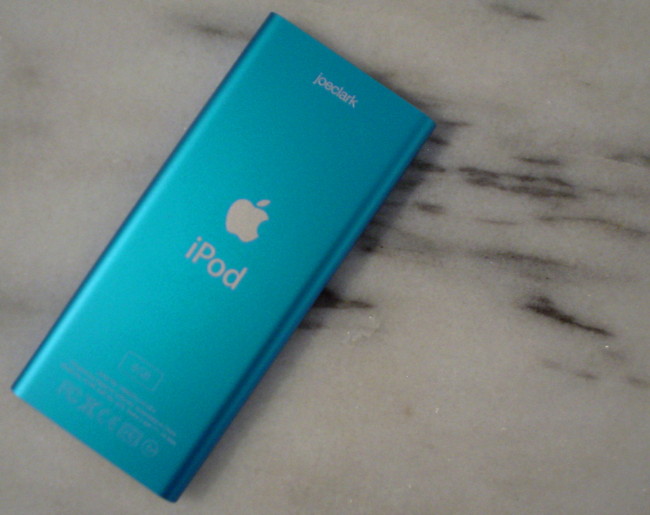 That took long enough that I frequently missed an infrequent bus waiting it for finish. I’m also a transit fan, and petits fonctionnaires of the local transit monopoly hate me as much as 300-strong crowds do.

But frontline workers in every domain I’ve critiqued have loved me to death and cheered on what I was doing. Library staff (particularly men, who suffer greatly under library gynocracies) perked up when I walked in, and also cornered me in grocery stores to pour their hearts out. When they weren’t filing complaints against me (the feeling was mutual), bus drivers found me delightful. There were always more than a few somebodies who appreciated my critique of critics and who encouraged me. Essentially, I had fans, though I must concede some fans became troublesome.

So you should be able to appreciate why this project goes by the name Podcasting Had a Good Run. Things can be going well and poorly all at once – or expanding and contracting all at once. Think of airbags, which deflate as they inflate. Podcasting has suffered a stab wound on the way to a red-carpet gala.

In the terminology Adam Curtis popularized, podcasting is undergoing hypernormalization. True events are happening, but so are false flags, and you’re being told those flags are false even as BLM and antifa bash your head in with flagpoles.

Podcasting is going strong and it’s also being intentionally genocided. It’s happening all at once and you’re being told half the story at most. When exposed to the other half, some may call it fake news and try to get its popularizers banned and deplatformed, thereby proving the point. We can be in a bubble and say so, yet still not prevent the bubble from inflating and deflating. Yet nobody is saying we’re in a bubble. We are in a bubble, and I’ll prove it.

As with everything else I have done, I will be right. This time, though, I’m going to induce you to act like a fan. You’ll read my work and you’ll pass it around, and some of you will pay handsomely to hate-read it. Because the idea of giving away critiques of a medium that already gives itself away, even while a super-elite skims a billion bucks out of the industry for its own depraved ends, is as preposterous as subscribing to top-rated podcasts solely because they are top-rated.

Irregardlessly, to run a business I have to maintain some method of receiving tips (perhaps also plaudits) and corrections. Serious persons may send electronic mail.